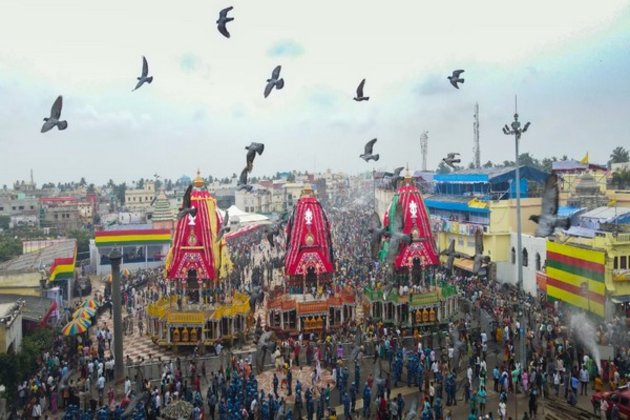 Rath Yatra festival in Odisha's Puri to be celebrated today

After due rituals, the three Raths of Lord Jagannath, Devi Subhadra and Lord Balabhadra have been pulled and put stationed in front of the Singha Dwara of the Shreemandira on Thursday itself. The Yatra will take place today.

Odisha Police have made top-notch security arrangements keeping the expected crowd at the festival in mind.

Renowned sand artist Sudarsan Pattnaik has made magnificent sand art with the message: On this Rath Yatra, let us pledge to "Say no to single-use Plastic".

"I convey my heartiest greetings and good wishes to the people of our country on the auspicious occasion of Rath Yatra. The Rath Yatra of Odisha, depicting the annual journey of Lord Jagannatha, considered to be an incarnation of Lord Vishnu, witnesses the coming together of the entire community in celebration of the grace and divinity of the Lord," he said.

"Devotees who join the Rath Yatra consider it their blessing to pull the chariot of the Lord Jagannatha. The splendour and grandeur of the Rath Yatra is truly unparalleled. May the pious and noble ideals associated with Rath Yatra enrich our lives with peace and harmony," added Naidu.

The Ratha Yatra, also known as the Chariot Celebration of Lord Jagannath, Devi Subhadra, and Lord Balabhadra, is the most prominent Hindu festival in the Puri city of Odisha. This festival takes place every year on the second day of the Shukla Paksha in the months of June or July. This year the festival falls on July 1.

The three chariots are built a new, every year ahead of the annual chariot festival.

Vibrant colours, enthusiastic faces, crowded shops, and cheery craftspeople are just a few of the highlights of Rath Yatra in Puri, the popular Chariot celebration held on a big scale every year outside Jagannatha Temple. (ANI)