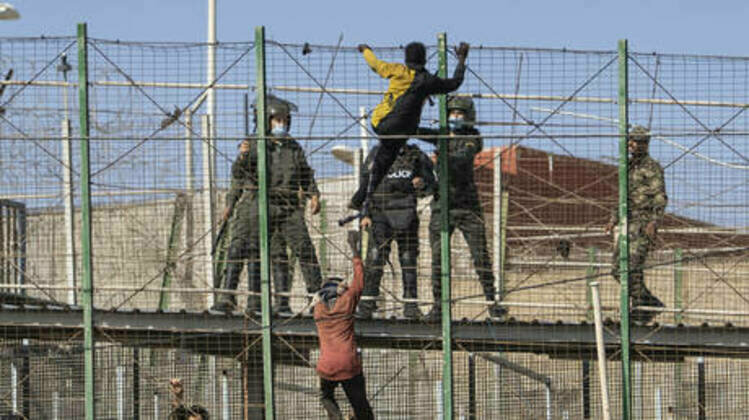 More than two dozen migrants have died in a stampede while trying to cross into the Spanish enclave Melilla from Morocco, that country's Association for Human Rights (AMDH) announced on Friday evening.

Around 2,000 migrants, many from Sudan, tried to cross a guarded border fence at dawn on Friday. Harrowing images, published by AMDH, show people lying on the pavement next to the border control area, some with blood-covered hands and torn clothes.

"AMDH Nador confirms that the death toll, as of 9pm, in the ranks of sub-Saharan migrants is 27 dead. All are at Hassani Hospital morgue in Nador. A very heavy, catastrophic record that shows that migration policies are deadly, with borders and barriers that kill," a caption to the photo reads.

The association called on the authorities to open "a serious investigation" to determine all the circumstances of the tragedy.

According to Morocco's Interior Ministry, some of the victims died of injuries sustained in the incursion while some fell from the top of the iron fence barrier. Dozens of migrants and security personnel were injured. Just 133 people managed to reach Spain.

According to an earlier statement of the Spanish government's delegation in the area, all of the migrants who "broke through the access gate of the Barrio Chino border checkpoint and entered Melilla by jumping over the roof of the checkpoint" were men and apparently adults. In a separate statement, the authorities said that a "large" number of forces were deployed by Morocco and that they "cooperated actively" with Spanish colleagues.

Speaking in Brussels, the Spanish prime minister, Pedro Sanchez, described the crossing as an "attack on the territorial integrity" of Spain and as a "violent assault," which he blamed on "mafias who traffic in human beings."

He also hailed the "extraordinary work of the Moroccan government in coordination with Spain to try to stop a violent assault, which was, in this case, well resolved."

Friday's tragedy became the first mass incursion since April, when Spain and its former colony Morocco ended a year-long diplomatic feud and decided to "usher a new phase" in bilateral relations.

The improvement of relations has resulted in a significant decrease in the number of migrants arriving to Spain from Morocco.