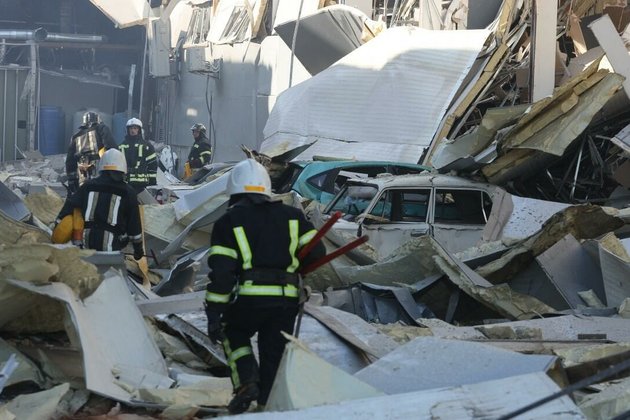 7:17am: Russian gas transit to Europe via key Ukraine route falls to zero

Nominations for Russian gas transit via Ukraine at the Sokhranovka entry point for May 11 declined to zero, data from Ukraine's gas pipeline operator showed on Wednesday, following Kyiv's warning of shutting down supplies through the route.

Ukraine said on Tuesday it would suspend the flow of gas through the transit point which it said delivers almost a third of the fuel piped from Russia to Europe through Ukraine, blaming Moscow for the move and saying it would move the flows elsewhere.

The data also showed that requests for Russian gas transit to Europe via Ukraine at the Sudzha entry point stood at almost 72 million cubic metres for Wednesday.

6:56am: Russian troops pushed away from Kharkiv says Zelensky

Russian troops are being pushed away from Ukraine's second city Kharkiv, President Volodymyr Zelensky said in his nightly address on Tuesday.

The president said he had "good news" from the northeastern Kharkiv region.

"The occupiers are gradually being pushed away," he said. "I am grateful to all our defenders who are holding the line and demonstrating truly superhuman strength to drive out the army of invaders."

The head of the Kharkiv regional state administration Oleg Synegubov said on Telegram that "fierce battles" were ongoing in the region, and that the city itself was under heavy fire.

"Due to successful offensive operations, our defenders liberated Cherkasy Tyshky, Rusky Tyshky, Rubizhne and Bayrak from the invaders," he said.

"Thus, the enemy was driven even further from Kharkiv, and the occupiers had even less opportunity to fire on the regional centre."

Since Russia invaded Ukraine, Madrid has revived calls to build a huge gas pipeline between Spain and France dubbed MidCat that would boost Europe's energy independence from Russia.

Initially launched in 2003, the 190-kilometre (120-mile) Midi-Catalonia (MidCat) pipeline would pump gas across the Pyrenees from Hostalric just north of Barcelona to Barbaira in southern France.

Its aim was to transport gas from Algeria through Spain to the rest of the European Union. There are currently only two small gas pipelines linking Spain and France.

But following several years of work, the project was abandoned in 2019 after energy regulators from both countries rejected it amid questions over its environmental impact and profitability.

US lawmakers voted Tuesday to send a $40 billion aid package to Ukraine, as Washington warned that Russia was likely girding for a long conflict with its neighbor.

The defense, humanitarian and economic funding passed the House of Representatives by 368 votes to 57, with the two parties' leaders having already reached an agreement on the details. It will likely pass the Senate by the end of the week or next week.

All the dissenting votes came from the Republican ranks.

"With this aid package, America sends a resounding message to the world of our unwavering determination to stand with the courageous people of Ukraine until victory is won," House Speaker Nancy Pelosi told her Democratic colleagues ahead of the vote.