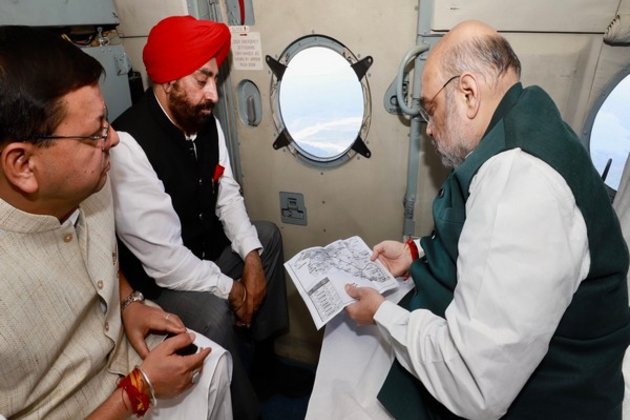 Centre fully with people of Uttarkhand in hour of crisis: Amit Shah

Dehradun (Uttarakhand) [India], October 21 (ANI): Union Home Minister Amit Shah conducted an aerial survey of rain-affected areas of Uttarakhand on Thursday and said effective coordination between various agencies and timely warnings had helped contain the loss to life and property in the state.

"I assure the people of Uttarakhand that in this hour of crisis, Narendra Modi government stands completely with you," the Home Minister said in a tweet.

Amit Shah said he conducted an aerial survey of the areas affected by the natural calamity and assessed the damage and reviewed the relief work.

"Under the leadership of Modiji, we were able to reduce the loss of life and property to a great extent due to the coordination between central and state government and rescue agencies and timely warnings," he said.

Shah also addressed the media after his aerial survey.

"I held a high-level review meeting with officials of the state and Centre over the natural calamity in Uttarakhand. Due to timely rainfall alerts, the extent of damage could be controlled. Now, the Char Dham Yatra has resumed," he said.

He said that more than 3,500 people were rescued and over 16,000 precautionary evacuations were done so far.

Shah arrived in Dehradun earlier today to take stock of the situation arising out of incessant rains.

He said that the death toll in the rain-battered Uttarakhand has gone up to 64 and more than 11 people have been reported missing so far.

The minister said normalcy is returning in the state gradually. "Roads have been cleared in Nainital, Almora and Haldwani. Power stations will also resume operations soon. Mobile network has been restored in 80 per cent of areas of the state," he said. (ANI)