MALE -- The Maldives has received more tourist arrivals between January and July 2021 than that for the whole year of 2020, according to data from the Ministry of Tourism quoted by local media on Tuesday.

Tourism Ministry data showed that the Maldives received 559,000 tourists as of July 17, 2021, the same number of tourists it received for the whole of 2020. (Maldives-Tourism)

TEHRAN -- Iran completed the construction of a major onshore oil pipeline which will allow the country to bypass the Hormuz Strait, a vital passageway of the region, for its oil exports, Tasnim News Agency reported Tuesday.

The 2-billion-U.S.-dollar project will allow the crude to travel some 1,000 km from Iran's pumping facilities in Goureh located on the southwestern shores to the Oman Sea port of Jask on the southeastern shore of the country. (Iran-Oil Pipeline-Hormuz Strait)

ISTANBUL -- The Turkish subsidiary of the Industrial and Commercial Bank of China (ICBC) was given lately the Outstanding Business award by the Global Business Excellence Awards 2021.

"The Global Business Excellence Awards are one of the most prestigious awards in the world, which is valuable for us to receive," Gao Xiangyang, chairman of ICBC Turkey, said in a statement. (ICBC Turkey-Award)

KATHMANDU -- With a large number of workers in the tourism industry rendered unemployed amid the devastating COVID-19 pandemic, the Nepal Tourism Board is implementing a program to provide temporary employment to those who have lost their jobs.

Launched in partnership with the United Nations Development Program, the program is offering short-term employment to lower-level workers in the tourism sector by engaging them in the sanitization and maintenance of tourism facilities, which include trekking routes and bridges along the trails. (Nepal-Tourism-Jobs)

LISBON -- Portugal signed on Tuesday four investment contracts with private companies that will contribute 141 million euros (166.23 million U.S. dollars) in value to the country's economy, in addition to creating 500 jobs. 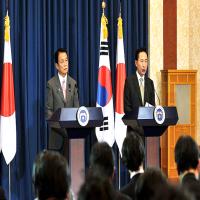 Vulgar remarks by diplomat cause cancelation of S.Korea-Japan summit