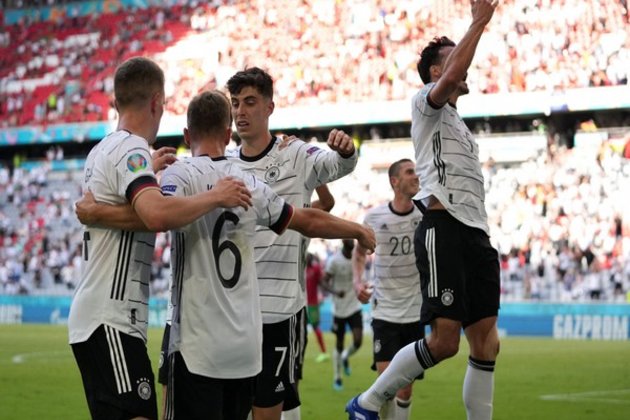 Munich [Germany], June 19 (ANI): Kai Havertz and Robin Gosens got among the goal-scoring chart as Germany thrashed Portugal 4-2 in the Group F encounter here at the Allianz Arena on Saturday.

Germany will next take on Hungary in the tournament while defending champions Portugal will lock horns against 2018 FIFA World Cup winners France.

Portugal got the first goal in the match as Cristiano Ronaldo made a stunning run and he was able to net the ball into the goalpost, giving his side a 1-0 lead.

However, Ronaldo's side suffered two major hiccups in the first half as Ruben Dias and Raphael Guerreiro registered their own goals giving Germany a 2-1 lead. No more goals were scored and at halftime, Germany went in with a lead.

In the second half, Germany scored two more goals courtesy of Kai Havertz and Robin Gosens in the 51st and 60th minutes respectively, and as a result, Germany took a 4-1 lead.

Diogo Jota was able to peg one goal back in the 67th minute for Portugal, but still, Germany were the favourites to win the match as they had a 4-2 lead. In the end, no more goals were scored and Germany went away victorious. (ANI)