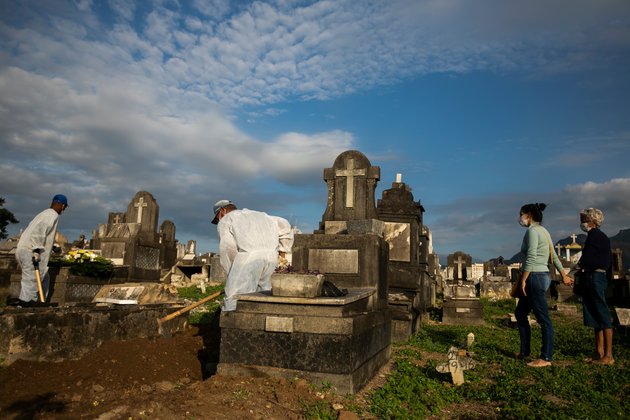 Johns Hopkins Coronavirus Resource Center has reported 177.8 million global COVID-19 cases and 3.8 million deaths. The U.S. remains the country with the most infections at 33.5 million, followed closely by India with 29.8 million.

German Chancellor Angela Merkel and French President Emmanuel Macron urged European Union countries Friday to be vigilant against the spread of new coronavirus variants and called for the bloc to coordinate its COVID-19 border reopening policies.

"Caution is still necessary so that we have a summer of many freedoms, if not all freedoms," Merkel told a joint news conference in Berlin before the two leaders held a working dinner.

"Some countries have reopened their borders earlier for tourist industry reasons, but we must be careful not to reimport new variants," Macron said.

Macron noted the situation in Britain, while Merkel pointed to Portugal to show how things can quickly change.

Britain this week delayed a relaxation of pandemic restrictions because of the prevalence of the delta variant, which was first identified in India, while Portuguese authorities on Thursday banned travel in and out of the capital, Lisbon, because of the variant.

In other developments Friday, Israel's new government, which was sworn in Sunday, said it would transfer up to 1.4 million doses of soon-to-expire Pfizer coronavirus vaccine to the Palestinian Authority in exchange for about the same number of doses the authority anticipates receiving later this year.

The authority canceled the deal later Friday, however. Its health minister, Mai Alkaila, told reporters that the expiration date for the vaccine was in June, which would not give the authority enough time to use the doses.

Israel has been criticized for not sharing vaccine with the more than 4 million Palestinians in the occupied West Bank and Gaza Strip.

Uganda announced Friday that it is tightening lockdown measures to stop a rise in coronavirus cases. Public and private vehicles are banned on roads except for those vehicles carrying cargo, essential workers or the sick.

However, Biden's plan to have 70% of Americans at least partially vaccinated by Independence Day, July 4, may fall short because of a sharp decline in the number of vaccinations that began about two months ago.

Vice President Kamala Harris visited the southeastern city of Atlanta, Georgia, on Friday to encourage people to get vaccinated against the coronavirus.

About 36% of Georgians have been vaccinated, a rate lower than those of most U.S. states.

Canada announced Friday that border restrictions on nonessential travel with the United States will be extended until July 21.

Bruce Springsteen's Broadway show is set to open June 26. Proof of COVID vaccination must be provided, but the venue will not recognize the AstraZeneca shot, which has not been approved for use in the United States but has been accepted in Canada and other countries.

Also, children 16 and younger must present proof of a recent negative COVID test and must be accompanied at the Saint James Theater by a fully vaccinated adult.