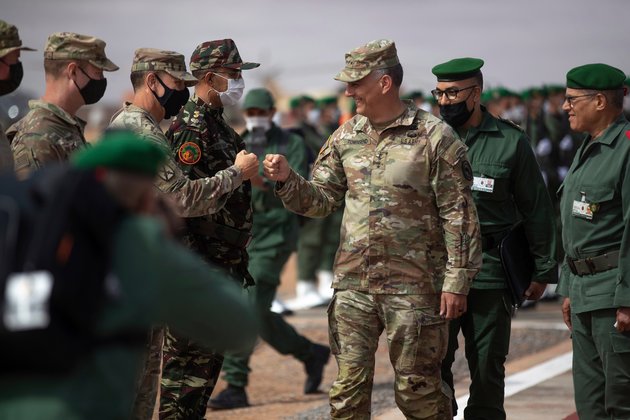 US General: 'Wildfire of Terrorism' on March in Africa

TAN-TAN, MOROCCO - A senior U.S. general warned Friday that the "wildfire of terrorism" is sweeping across a band of Africa and needs the world's attention. He spoke at the close of large-scale U.S.-led war games with American, African and European troops.

The African Lion war games, which lasted nearly two weeks, stretched across Morocco, a key U.S, ally, with smaller parts held in Tunisia and Senegal. The annual drills were skipped last year due to the COVID-19 pandemic.

"I am concerned about the security situation across a band of Africa," from the Sahel region in the west to the Horn of Africa, Townsend told reporters. He noted deadly attacks by al-Qaida- and Islamic State-linked militants and al-Shabab. "All of them are on the march," he said.

African neighbors are helping governments deal with the threat, but, he added, "all of that does not seem to be sufficient enough to stop what I call ... (the) wildfire of terrorism that's sweeping that region."

African Lion saw more than 7,000 troops from seven countries and NATO carry out air, land and sea exercises together.

"It has helped our interoperability, our joint capabilities, and provided readiness and a good opportunity to build cohesion across the forces," said Maj. Gen. Andrew Rohling, commander of the U.S. Army's Southern European Task Force Africa. He spoke Friday in the desert town of Tan-Tan.

There was a hitch at the start, with Spain withdrawing from the war games, citing budgetary reasons. Press reports attributed the move to Spain's poor relations with Morocco, a former key partner.

The two countries have been at loggerheads since Spain took in the leader of the Polisario Front independence movement - Morocco's No.1 enemy - for COVID-19 treatment in a Spanish hospital earlier this year. The Polisario is fighting for independence for the Western Sahara, a vast region that Morocco claims as its own.

During the exercise, Morocco held some airborne operations near the Western Sahara and not far from Polisario refugee camps in Tindouf, in neighboring Algeria.

"Those activities have been perfectly conducted and agreed upon between the two militaries," Moroccan Brigadier Gen. Mohammed Jamil told The Associated Press.

Townsend, asked whether any action spilled into the disputed Western Sahara, was categoric: "I can confirm it did not."

The participating countries in African Lion were the U.S., Morocco, Tunisia, Senegal, Italy, The Netherlands and Britain. Observers also attended from countries including Egypt, Qatar, Niger and Mali.