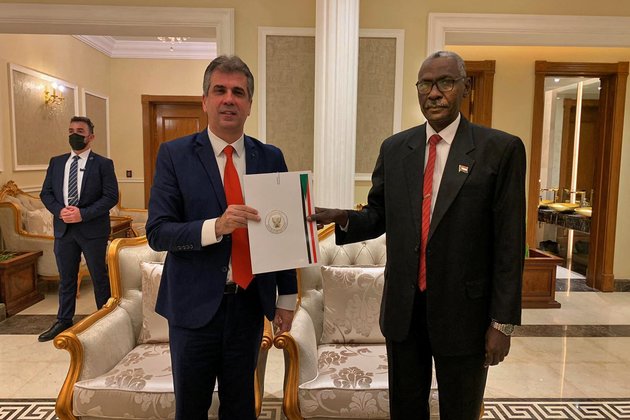 Sudan's Cabinet approved a bill Tuesday that will roll back a 63-year-old law that strained relations between the country and Israel, according to a statement.

The decision aimed at repairing diplomatic and trade ties with the Jewish state comes months after both countries struck a peace deal.

Sudan joins the United Arab Emirates, Bahrain and Morocco in repealing the law that barred Arab nations and allies from doing business with Israel.

Last year, Egypt and Jordan were the only Arab countries that recognized Israel.

Before then, serious sanctions that included hefty fines and jail terms were handed down to those who defied the law.

Despite shifting positions, other Arab countries will not recognize Israel until the Jewish state reaches an agreement with its neighbors, especially Palestinians.

In the statement, the Sudanese Cabinet echoed a "firm position on the establishment of a Palestinian state within the framework of a two-state solution."

Sudan's change of heart can also be attributed to a deal it struck with the U.S. government under the Trump administration that will see it removed from a blacklist of nations suspected of sponsoring terrorism.

President Donald Trump wraps up a phone call with the leaders of Sudan and Israel as Cabinet officials and advisers applaud in the Oval Office of the White House, October 23, 2020.

Mass protests in 2019 forced former President Omar al-Bashir to end his 30-year Islamic rule, during which the African country took a strong stance against Israel.

The new transitional government charts a new path of restoring ties with the international community, however, as part of its efforts to resuscitate the economy and ensure development.

That decision seems to be paying off as the country received many diplomatic visits, particularly from Israel.

Reuters reports that Israeli Intelligence Minister Eli Cohen, who visited Khartoum, said the move to recognize Israel is a "necessary step toward the signing of a peace accord between the countries."

The bill still needs to receive the backing of Sudan's ruling sovereign council before the order goes into effect.